Welcome to Swallow Hall Leisure Complex, the ideal place to relax and unwind, situated on a small farm set in pleasant rural countryside only 15 minutes drive from York City centre.

Swallow Hall has been home to the Scutt family since 1935 when Alf and Margaret rented it as a farm from his brother. When his brother passed away in 1970 the farm was inherited by his daughter who chose to sell it to the couples young son, John, and his wife Christine. The family continued to farm livestock, including dairy cows and pigs, in addition crops such as corn and sugar beet until 1990. It was at this stage that John, Christine and their son, Jonathan, chose to sell their livestock and renovate the old cow sheds into two holiday cottages and the paddock into a 4 acre caravan / camp site. To attract people to the accommodation in 1991 they opened a 9 hole golf course and driving range, adding a further 9 holes in 1992. Then in 1999 the Swallow's Nest clubhouse opened, offering catering facilities to golfers, those staying on the site and the local community. Following the pandemic in 2020 it was renamed The Roost. Finally in 2006 an additional 9 holes were added resulting in the two golf courses that people play today!

The golf courses are spread across 90 acres and due to and an efficient underground drainage system it is open practically all year round. Over the years we have hosted annual Captain Days for our members, numerous society days and several successful charity events. Those who chose to reside with us, whether it be in the cottages or on the caravan site, have easy access to both golf courses and can play at a discounted rate! Alternatively, for those with other hobbies we are in close proximity to several fishing lakes, the McArthurGlen Designer Outlet, York Racecourse, York City Centre, York Maze and a few local pubs!

"An ideal cottage and glorious area to spend out golden wedding anniversary….. convenient to York and yet in great country side." 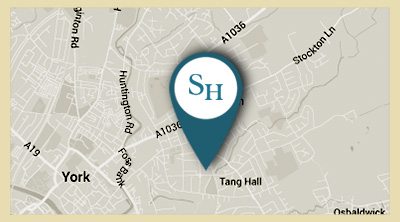